PUP grazing is a new grazing management strategy aimed to improve pasture intake and utilisation for temperate and tropical grasses and legumes. PUP is an acronym for proportion of ungrazed pasture, which describes the key principle behind the management technique.

Research conducted as part of the C4Milk project is exploring alternative management techniques and finding surprising animal and pasture growth responses. In periods of high growth, forage quality changes rapidly with a decline in the proportion of leaf to stem on offer. Pastures and legumes can be short and lush one day and tall and stemmy the next (Figure 1).

PUP grazing principles are providing answers to managing pastures with variable stem heights, a major challenge faced when grazing tropical pastures. In trials carried out at Gatton Research Dairy, Queensland, C4Milk has shown that by only grazing leaf material using the PUP strategy, pasture intake and pasture growth increases. This leads to higher amounts of quality leaf being consumed, more frequent grazings and hence a greater amount of utilised pasture per season.

In understanding these characteristics and how they affect grazing behaviour and intake rates, C4Milk has been able to demonstrate declines in dry matter intake and milk production when cows are forced to eat down into the stemmy stratum. In many cases, traditional recommendations of grazing to a residual height of five centimetres or leaving a third of pasture in the paddock can be detrimental to animal production and plant performance.

The PUP grazing strategy is based on the following principles:

The critical PUP principle of only grazing leaf material has flow-on effects to many behavioural, nutritional and animal production outcomes. In order to achieve high milk per cow from pastures in subtropical climates, achieving high intake rates of high-quality forage is key.

However, producers in northern regions face the challenges of hot, humid weather and its effects on pasture growth and quality. This results in limited time grazing to achieve target intake rates and balancing time for partial mixed ration (PMR) consumption that often supplements grazing.

High intake rates of high-quality forage can only be achieved in dense leafy pastures of adequate height, so cows can maximise bite mass. C4Milk trials have shown that by allocating enough pasture to ensure only the top leafy material is consumed, bite size, intake rate and the quality of material consumed is maximised.

A recent C4Milk study found dairy cows which were forced to graze the bottom stratum of lucerne pastures down to five centimetres (imposed by reducing pasture allocation/increasing stocking rate), refused to graze into the stemmy material. The result of this was decreased forage intake and diet quality as well as a reduction in milk production of 1.6 litres per cow per day (Ison & Benvenutti, 2016).

Where traditionally cows would be allocated enough pasture based on what was on offer from the ground up and allowing for a third of material to be left behind (or 5cm residual), what has been found is that cows are showing reduced intake and under-grazing. When implementing PUP on larger grazing areas, allowing natural selection of unlimited leaf material, cows have demonstrated they will never graze below the stem height (Figure 2). This was also demonstrated in the traditional system.

These findings help explain lower intake rates in trials comparing traditional grazing allocations compared to those of PUP, where cows would have to graze into the stemmy material to achieve target intake rates under traditional methods or reduce intake levels. 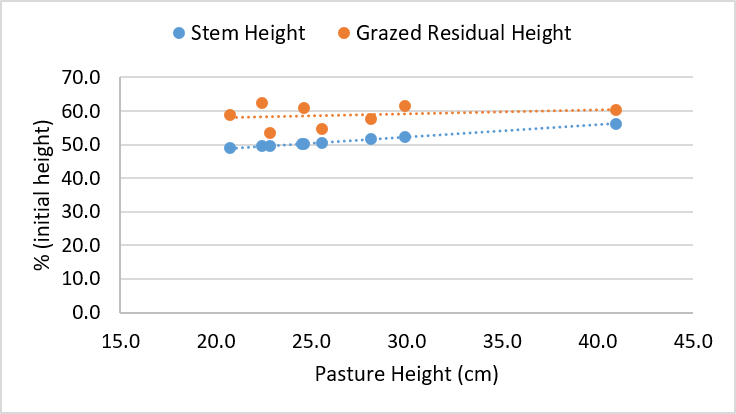 PUP’s simple pre and post-grazing checks allow a visual inspection of the pasture to ensure 100% of the leafy material is offered and grazed, leaving behind the bottom stemmy stratum and contaminated leafy material around the faecal patches.

Where traditionally pasture allocations might have forced cows to graze down into the stemmy stratum, 1.1ha would be allocated following PUP techniques to avoid any grazing of stemmy material.

C4Milk has developed a calibrated pasture ruler that measures the amount of leaf and stem on offer for kikuyu and annual ryegrass to assist producers in making allocation decisions using PUP principles. Post-grazing pasture checks are also recommended to confirm pastures have not been over-grazed. Looking for leafy material left around manure patches and reasonable stem material will indicate that cows have only consumed leafy material and the allocation area was accurate (see Figure 3).

Pasture canopy structure and defoliation intensity are the two key drivers of intake rate and diet quality of pasture (Carvalho 2013). Pre-grazing sward characteristics such as pasture height, leaf stage and leaf density can vary between and within pasture species, particularly in tropical climates.

Implementing any grazing management strategy on tropical pastures such as kikuyu presents challenges such as accumulation of plant residues, particularly during periods of high growth. Faster grazing rotations using PUP minimises stem elongation and the accumulation of residual. However, the impact of this practice on the long-term productivity of the pasture needs to be evaluated.

Reducing pasture residues using machines or a second group of animals is a common practice to avoid the accumulation of residues. In refining these management practices, C4Milk has identified the detrimental impacts of reducing residuals to a low level and the physiological plant responses promoting faster pasture growth under PUP systems.

Research carried out in 2018–19 on kikuyu pastures assessed the effect of leaf stage and cutting (grazing) height of the stem residues on leaf growth. It was concluded that for kikuyu, grazing at an earlier leaf stage of three leaves maximised leaf growth, minimised stem growth and residuals were best managed between 10cm and 15cm (Figure 4).

Similar results were found in annual ryegrass, where grazing at the two-leaf stage was found to maximise leaf growth. However, mulching pastures back to a standard height of 5cm proved to have many negative effects on growth rate in the next harvest event, particularly when the apical growth bud of the plant was removed. Hence, PUP’s strategy of only grazing leaf material very frequently to manage stem elongation and residual accumulation promotes the faster growth rates as the apical bud is generally left ungrazed compared to traditional methods. Figure 4 - The effect of leaf stage and cutting height of the stemmy residue on the growth rate of the top leafy stratum (TLS) and the bottom stemmy stratum (BSS) of kikuyu pastures (7 January – 14 April 2019).

Residual management largely determines pasture growth both in the short and the long-term. C4Milk is continuing to investigate best management strategies for optimal animal production and plant performance aspects.

The research is indicating that removal of the apical buds has extremely negative effects on pasture regrowth, production and rotation length which will most certainly be occurring when reducing residuals to levels below 10cm for kikuyu.

Further information on PUP and the latest research results and updates is available on the Dairyinfo.biz website.