Take the next step in boosting your herd’s performance by coming along to a genomics event in your region.

Genomic testing is the process of analysing a heifer's DNA - such as in ear tissue or a tail hair - to reliably predict her future performance in the herd.

Genomics can be conducted as early as birth, so farmers can make informed decisions about a heifer’s role in their herd. DNA samples are easy to collect and can be taken at the same time as routine husbandry procedures, such as ear tagging or disbudding.

Cow and Heifer Genomics Q and As

You Ask, We Answer on Heifer Genomics

To get started with heifer genomics, contact a genomic service provider. 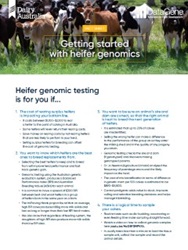 Take the next step in boosting your herd’s performance by coming along to a genomics event in your region.

DataGene is an independent and industry-owned organisation that is responsible for developing modern tools and resources to drive genetic gain and herd improvement in the Australian dairy industry, through research, development, and extension activities.

For more information about genomics, visit the DataGene website.